After the rain out that was Elliott’s 7th birthday, we decided to make up for it with a party at The Intrepid Sea, Air and Space Museum for his 8th birthday.

They offer a number of different themes, but Elliott wanted the spy theme. The two Secret Agent hosts were fantastic and led the kids around the aircraft carrier to get an up-close look at the spy planes, 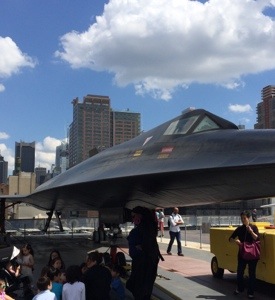 to visit the space shuttle

and to learn to break codes and make their own.

Then it was time for food and a cake from City Cakes (which was delicious). All of which were included in the package. 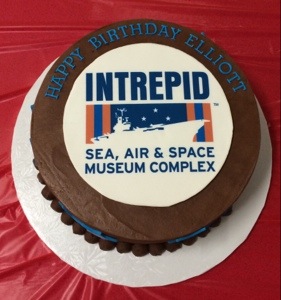 I have to admit that it was so nice not having to do anything except show up. I did put together the goodie bags, though. The kids received a pair of sunglasses, fake mustaches and an invisible ink pen in a “Top Secret” manila envelope.

The Intrepid really knows how to host a birthday party! The hosts were amazing, the museum is fantastic and the cake was delicious. Everyone, kids and adults, had an amazing time.

Disclaimer: We paid for the party ourselves and weren’t compensated in any way. It was just so fabulous that we would recommend it to anyone looking for a place to celebrate a special birthday. Click here to learn more about birthday parties at the Intrepid.

This site uses Akismet to reduce spam. Learn how your comment data is processed.